Inside my Head Part 2

As a follow up to my previous post, appropriately and creatively entitled "Part 1", I thought I should reveal the resulting prognosis from the IPSS procedure that was described. The "good" news is, that the test revealed substantial evidence that the pesky tumor is, in fact located on the Pituitary Gland inside my head.

For those who are as anatomy deficient as I was up until this gem of disease forced me into alternative Med School. The Pituitary Gland is a little nubual gland much like the "punching bag" looking thing that hangs in the back of your throat (Uvula). However, it is located dead center of the skull. Directly behind the eyes centered at the nose and directly between the ears. It occupies a small cavity just below the brain. The dictionary reference:

"the major endocrine gland. A pea-sized body attached to the base of the brain, the pituitary is important in controlling growth and development and the functioning of the other endocrine glands" 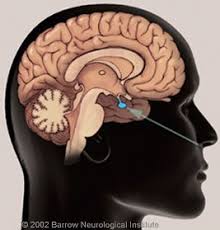 Not a very "convenient" location, when the discussion of surgeries begin to arise!

Just to be clear, in the case you have not learned it yet, Cushing's Disease (basically) is a condition where a benign (non-cancerous) tumor has developed on or withing the Pituitary gland and effectively taken over control of the production of a hormone called  Adrenocorticotropic hormone (ACTH), also known as corticotropin (INN, BAN), which controls a slew of bio-functions including the regulatory monitoring of Cortisol production from the Adrenals. This tumor, by contrast, is non-regulatory and therefore causes a continual flood of ACTH to be released into the body, which in turn triggers a constant flow of Cortisol infusion from the adrenals, which reeks all kinds of havoc on a number of the body's biological systems.

The manifestation of symptoms is fairly slow going at first and most often of a type that is recognized as fairly common stand alone conditions that generally are treated as such. Therefore, the pursuit of any underlying condition is usually postponed for quite a long period of time.

- Weight gain in the face and neck generally referred to as "moon face".

- Pink or purple tiger striped stretchmarks (striae) on the abdomen, thighs, breast and or arms.

- Persistent and or often times recurrent skin rashes or infections.

If you have noticed a gradual increase in and especially as an accumulation of, any of these symptoms, I would strongly suggest that you mention Cushing's to your Primary Physician and ask (demand) that a test be run for urinary Cortisol levels.

One thing worth mentioning here is that unfortunately, as of this time, Cushing's  is still considered a rare condition and is most often dismissed initially as a probable diagnosis. In my case, I quickly found myself head-to-toe with just about every turn and mention of the idea. I have yet to put to words my drama filled story of the various trials, tribulations and victories just to get a foothold on the consideration of testing for Cushings. However, I plan to do so very soon.

The IPSS test results that I mentioned at the beginning of this post in conjunction with the long line of tests leading up to this procedure, suggests very strongly that I, in fact do have the tumor and that it is definitely located in the pituitary. The procedure is also instrumental in giving more precise location information giving the surgeons a sort of map or GPS coordinates for getting to the tumor for extraction. I was a bit surprised to find out that, supposedly, there is no app. for that!

The extraction surgery is a procedure called Transsphenoidal surgery: This is the most common way to remove pituitary tumors. Transsphenoidal means that the surgery is done through the sphenoid sinus, a hollow space in the skull behind the nasal passages and below the brain. The back wall of the sinus covers the pituitary gland

So, as it stands, this is where I am in my journey with all of this. It has been a longtime coming to finally find myself here. It is almost surreal and hard to accept. Honestly speaking, there were many a time where I did not think that this day would actually arrive. And then there is the odd sensation of realizing that you have been routing for a diagnosis of a terribly dreadful and debilitating disease. Today, and every day at this point has become overwhelmingly significant and the individual steps toward treatment and recovery have gained a greater stride!

Posted by Craig Roberts at 7:37 PM

Email ThisBlogThis!Share to TwitterShare to FacebookShare to Pinterest
Labels: Cushing"s